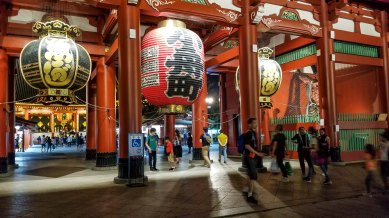 The day started early as we flew out of Clark, Philippines at 2 AM. We stopped in Seoul for a few hours. It was enough time to find our next gate, grab a bite to eat, and board the large airliner bound for Tokyo. After a very long day of travel, we finally arrived at Narita International Airport around noon. We cleared customs and immigration quickly. Then headed to the bank to exchange our money into Japanese yen.

As I was learning, things rarely go smoothly or quickly with my traveling companion. We were at the bank for a long time while she got organized. We then headed downstairs to pick up our JR passes and a PASMO card. We discovered a Starbucks along the way and ordered the first of many caffeinated beverages. I wanted to get going as soon as possible. But she wanted to sit in the Starbucks for a little. I couldn’t argue because we weren’t allowed to bring open drinks on the train. Unfortunately that turned into almost an hour before I could convince her to leave.

At this point I was done. I was exhausted from the flight (I don’t sleep well on planes). I had wanted to leave far earlier than we had. I was hungry (I couldn’t find any gluten-free food options in Seoul airport). And I was getting tired of my travel-mate’s passive-aggressive comments. I knew she was as tired as I was. But it didn’t make it any easier to take (don’t worry, the rest of the trip went a lot better).

As soon as we stepped onto the train and claimed seats, I popped in my headphones and shut out the world. We arrived at Asakusa station after an hour-long train ride. Fortunately my hostel was north of the station and hers was south so we parted ways here. I made it to my hostel, checked in, did some exploring, and got dinner.

Asakusa is one of my favourite areas of Japan. It’s located in the northeast part of central Tokyo and has a more traditional atmosphere. If you find yourself in Asakusa, there are a few interesting things you can check out.

Kaminarimon – the first of two large gates leading to Sensoji Temple.
Sensoji Temple – the oldest Buddhist temple in Tokyo.
Asakusa Shrine – one of the most famous Shinto Shrines.
Nakamise shopping street – a great place for food vendors and souvenirs.
Shin-Nakamise shopping street – a covered shopping arcade with shops and restaurants.
Kappabashi shopping street – a shopping street full of kitchen-related items such as tableware, utensils, appliances, sample food, etc.
Rox department store – a shopping and entertainment complex. You can find pretty much anything you need here and there’s a supermarket in the basement.
Sumida Park – a park with walking paths that stretches along the Sumida river. It’s especially beautiful during cherry blossom season.
Hanayashiki amusement park – a miniature amusement park with numerous attractions and a few rides.

Follow welcome to my little piece of quiet on WordPress.com
belovedgeliebt

It's a Britta Bottle!

Small Stories of a Twenty-Something Adventuring Through Life